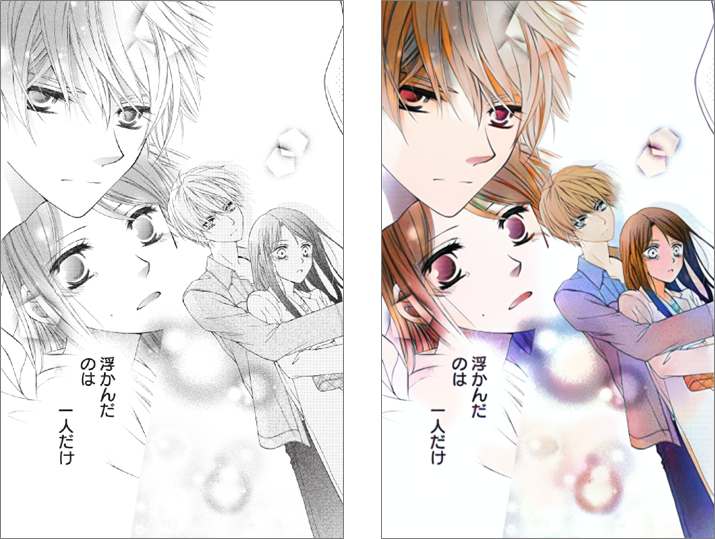 The initial releases have been distributed through Hakusensha e-net and other major e-book stores since as early as January 24, 2018.

Hakusensha have published a large number of Webcomics, such as Love Silky *2, the pioneer of monthly Web magazines, and have been involved in a large number of projects collaborating with CONPYRA *3, which is produced by Hakuhodo DY digital. This project is another product of this collaboration.

In this collaboration, PFN have developed the PaintsChainer manga coloring model, and Hakuhodo DY digital have been working on requirement definitions and specifications and directed the progress of the production. Starting with the first distribution this time, they will release other colored product versions as well.

*1 PaintsChainer(R)
PaintsChainer is an online automatic coloring service developed and provided by PFN, which became a big topic on Twitter and other social media sites on its release in January 2017.
After uploading black and white pictures, it colors them automatically or as specified based on deep learning technologies. PaintsChainer provides three different coloring models Tanpopo, Satsuki, and Kanna, free of charge.
Official site: https://paintschainer.preferred.tech

*2 Love Silky
Love Silky is the monthly Web magazine distributed by Hakusensha. It features a large number of manga works for women and it distributes a new issue every third Wednesday of the month. It has been five years since the first release of Love Silky in January 2013, and currently its sixty-first issue is being released in January 2018. It has two sister magazines Love Jossie (published since July 2015), which features manga works for women, and Jossie Bunko (started publication November 2017), which specializes in novels.
Official site: http://www.hakusensha.co.jp/silky_web

*3 CONPYRA
CONPYRA is the author agent business produced by Hakuhodo DY digital.
Currently a lot of new content is generated and issued by users on the digital platform every day. CONPYRA uncovers particularly excellent works using their proprietary data analytics capabilities and produces these works collaborating with the authors/creators based on agent agreements.
In addition to agent work, CONPYRA is promoting the development of a large number of businesses focusing on novels and manga, in collaboration with a variety of publishing companies.
Official site: https://conpyra.com